Many moons ago, I studied Chemistry, peppered with a light dose of Mathematics, a sprinkling of Atomic and Nuclear Physics and, most absorbing of all, a one year course in Philosophy delivered by Stewart R. Sutherland based on his book “Atheism and the Rejection of God: Contemporary Philosophy and the Brothers Karamazov”.

The last involved wrestling with the concept of atheism, fortified by a diet of coffee and digestive biscuits (all I could afford to sustain myself within my limited budget and more limited culinary imagination) and working my way through Fyodor Dostoyevsky’s work.

Strangely, and possibly of even less interest to you, the only academic prize I recall winning was for the exam dealing with Prof. Sutherland’s lectures.

The book which my prize brought me, “The Making of Mankind” by Richard Leakey was one of the many things that kicked off a lifelong wanderlust and passion for writing and photography.

A natural question at this point is why then did I choose to train as a Chartered Accountant?  That is the subject of a different blog and at least now I spend my days working in Media and Communication which makes me much happier!

You may also be wondering where this rather random introduction is going and what on earth it may have to do with belgradestreets?

The answer in part lies in this picture which first appeared in a post on by my blog from 18 September 2011, featuring kосанчићев венац: 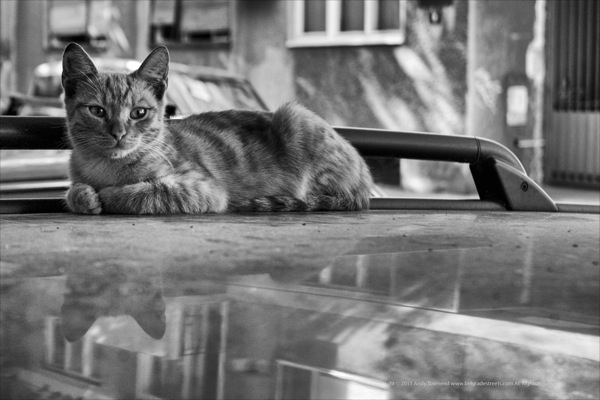 The choice of this image reflects a chance recollection this morning of the paradox posed by Schrödinger’s cat experiment, stemming from his explanation of the problem posed by the “Copenhagen” interpretation of quantum mechanics applied to everyday objects. His thought experiment suggested that the subject, a cat, might be alive or dead, depending on an earlier random event.

In my mind’s eye I have always confused this with another famous concept, the Heisenberg Uncertainty Principle which, put simply, means that the more precisely one property of an object is measured, the less precisely the other can be controlled, determined, or known.

Conflating both these rather dense principles, I have had a life long feeling that when we observe, measure or record something, we change it. Our simple act of observation alters the flow of events. Perhaps we can never observe objects, people or events with impartiality, disinterest or independence. We can never know what would have happened next had we not observed.

Which in a circuitous way brings me back to my point.

When we make photographs, are we simply recording and observing or does that very act of making the image change our subject?

On a very mundane level, the cat on kосанчићев венац in the image above demonstrated definite change as a result of my intervention. Initially sleeping, the creature perked up when my lens intruded and, after posing for the shot, snarled and skittered across the roof of the car in search of a quieter place to catch the rays of the afternoon sun.

As photographers, do we simply observe and record or do we change what we see?